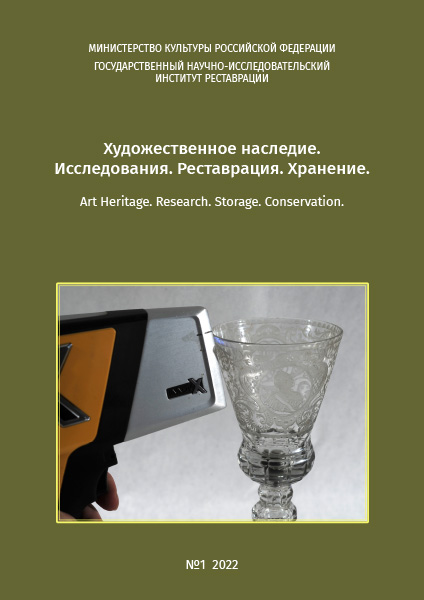 Antonov D.B., Director of the State Research Institute for Restoration, Editor-in-chief of the journal

Barabanova E.V., Horosheva Yu.A. A series of Russian folk clothes sketches by Fyodor Solntsev as a historical and ethnographic source

The article is devoted to a series of ethnographical sketches of Russian peasant and merchant costumes, made by an artist and archaeologist F.G. Solntsev. The drawings arouse great interest of art historians, costume historians, as well as specialists studying traditional material culture and exploring sources for the practical reconstruction of folk clothes. Unfortunately, the collection of drawings has not been fully published and remains little studied. Currently it is stored in the New York Public Library. For the domestic researchers, it became available not so long ago thanks to the development of digital technologies. The publication of drawings on the NYPL web-site in a quality suitable for scientific work allows them to be studied and included in the circulation of research activities. Fyodor Grigoryevich Solntsev is known primarily for his sketches of ancient architectural monuments, icons, objects of decorative and applied arts and ancient weapons. Drawings by F.G. Solntsev are characterized by exceptional accuracy and great attention to detail. During the study of the complex of pictorial and tangible materials of the 19th century devoted to folk costume, and comparing it with watercolors from a series of ethnographic sketches, it became obvious that only one part of the drawings was made according to field observations during his travels in Russia. It is distinguished by the documentary character. As a result of the study and analysis, the series of drawings "Folk Clothes" was relatively divided into three parts: drawings that can be considered ethnographically reliable; drawings that are definitely of a secondary nature, "copy", that is, created not as a result of direct sketches from the nature, and for which primary sources were found; images about which it is not yet possible to say with certainty whether they are original or secondary. Thus, a series of ethnographic sketches of folk clothes by F.G. Solntsev cannot be used as unconditional evidence, for example, in the attribution or examination of artistic values, without approaching this critically.

Bulgaeva G.D. Icons of the Athos mode of execution with dated inscriptions of Altai

Bulgaeva G.D. – candidate in art studies and an assistant professor in the Department of Arts, Costume and Textiles, Altai State University, icon painter of the Barnaul Diocese
E-mail: BulgaevaGD@yandex.ru

Dated icons with captions are of special interest for research, being a reference point in the time and territorial space of art history. Due to this, it is possible to attribute a number of works that don’t have captions. The most capacious texts give reason to determine the exact origin of the monument. Thus, the iconographic centers and the names of individual icon painters, who worked more than a hundred years ago, are revealed. Iconographic analysis and work to identify the inscriptions confirmed the presence of several of these images in the temples of the Barnaul metropolis. Among the designated monuments, a certain number of works with dated signatures belong to the Athos letter of the late XIX and early XX centuries. The relevance of studying the monuments of Athos iconography is confirmed by a significant number of scientific publications on this topic. Historical information about the close ties between Altai and the Holy Mountain of the turn of the XIX–XX centuries proves the regularity of the actual presence of these monuments on the territory of the Altai Krai and the Altai Republic. The revealed archival documents testify to the high culture and special veneration of Athos images at the local level. The meeting of the commissioned icons painted on the Holy Mountain was accompanied by multi-day processions, which were approved by the ruling bishop. The creation of the identified works is limited to 1890-1912 and refers to various icon-painting workshops of Russian monasteries located on Mount Athos. The article attempts to unite the Athos icons into groups, in accordance with their origin. The iconographic and stylistic diversity of the studied images reveals the self-sufficiency of the creative methods used in these art centers and the high professional level of icon painters. The chronological sequence allows us to determine the nature of stylistic changes in painting through the prism of time.

Sirro S.V., Startseva O.E. Technological research of a collection of colorless glass of the 18th century from the collection of the State Russian Museum

The problem of non-destructive testing of glass products has long been faced by everyone who has to deal with the problems of its analysis, identification and dating. In recent years, many articles have appeared in the foreign and domestic press in which the authors consider the possibility of studying the composition and structure of glass using modern equipment and new research methods. Unfortunately, most authors either do not take into account the specifics of museum storage of objects, or conduct experiments with single samples, which does not allow the conclusions to be extended to a wide range of glass products. The study of objects made of colorless glass stands apart, which researchers often ignore, focusing only on colored glass. The main objectives of this work were: 1. Identification of dating impurities in the composition of the glass mass and, as a result, a better understanding of the recipe for melting colorless glass in the 18th century in Russia. Identification of patterns that allow dividing glass products by time and place of production; 2. Selection of objects whose composition does not correspond to this recipe and more careful work on their dating for the General Catalog of the Museum; 3. Identification of later inserts and details in works that appeared in the process of their existence or restoration; 4. Possibility of using the obtained results for conducting examinations with objects made of colorless glass coming from other collections (both private and museum). The article discusses methods available for museum conditions for studying glass products, analytical equipment on the market, its advantages and disadvantages. In the process of working with reference objects from the glass fund, the department of decorative and applied arts of the State Russian Museum, 237 pieces of colorless glass dating back to the 18th century were examined. The compositions of the glass, the proportions of the main elements that make up the glass charge, additional impurities and their origin were analyzed.

Starikov Yu.V., Kaluzhnikov A.V. Attribution of unknown works of a taxidermist P.S.Mishchenko from the collection of the Sverdlovsk regional museum of local lore

The work represents an experience in attribution of subjects of taxidermy art by an archive photograph of the end of the 19th century and by indirect characters. Important characters are underlined. Preservation state of the stuffed leopard Panthera pardus L. in a dynamic pose and a process of its restoration are described, together with a stuffed Siberian tiger Panthera tigris altaica, and also one more leopard Panthera pardus L. in a static pose. Processes of preparation of stuffed animals by wire-wrap and sewing methods, characteristic of the second half of the 19th century are briefly described. Overlapping of images of restored stuffed animals with the archive photograph of 1896, made with the use of Adobe Photoshop CS5.1 software, resulted in the following. The original stand in the shape of a thick branch under the leopard coincides with the shape of this branch in restored specimen. Traces of lost twigs under the left fore paw and between hind paws are visible in a modern photograph. On the right side, the stand is shortened. Comparison of poses of the stuffed leopard demonstrates coincidence of general body contours, position of limbs, and their attachment. The shape of the tail is changed, because, by contrast to other body parts, it contains a wire and can be easily bend. In the archive photograph, the stuffed animal is attached to the wall. After restoration, the exhibit is situated on the floor, because the stuffed animal was received for restoration on a floor stand. Creative biography of a Russian taxidermist P.S. Mishchenko, the author of these stuffed animals, is represented. The history of arrival of stuffed large predatory mammals in the Sverdlovsk Regional Museum of Local Lore is described. An information on stuffed animals made by P.S. Mishchenko and situated in other Russian museums is provided. As a result of our work, the authorship, place, and time of creation of stuffed leopard and Siberian tiger was established: “P.S. Mishchenko Stuffed Animals Workshop”, Bolshaya Konyushennaya Ul., 1-8, Saint-Petersburg, 1882–1896.

In July 2019, during the restoration of the building of the First Cadet Corps (the former mansion of Alexandr D. Menshikov), fragments of two constructions that differ in terms of preservation – a cellar and an ice chamber (lednik) dated the first half of the 18th century were discovered. The lednik is a traditional building for the North-Western region of Russia and is a rare wooden architectural object for St. Petersburg of this time. In order to prepare the construction for dismantling and planning its further restoration, preliminary studies were carried out, including type of wood, the degree of moisture and density of wood, its general state of preservation, as well as the nature of biological infections. It was found that details from other wooden objects, probably, ships and barges were used for this construction. Parts of the ice chamber are made mainly from pine (Pinus sp.), only one – from fir tree (Picea sp.). Most parts of the lednik are waterlogged, according to the amount of moisture, the details are mainly classified as the 1st degree of preservation, four samples – the 2nd – 4th degrees of preservation. There are signs of bacterial and fungal damage. Based on the results of the conducted research, a plan for further work has been developed that contributes to the conservation of the unique historical architectural object. In the future, it is planned to exhibit the ice chamber in the museum space of the First Cadet Corps.